Experimenting with the Kumi Kreator by Cool Maker

I resisted the impulse to buy this thing for half a year, then finally pulled the trigger last week: 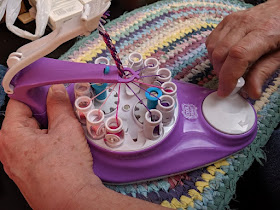 I paid $25 for the "2 in 1" version, but it turns out the machine functions the same as the $20 version. The differences are that the "2 in 1" is purple (admittedly pretty) instead of turquoise, and it comes with black bobbins as well as white ones. The bobbins themselves are identical, but the black ones have finer yarn (so more will fit on the bobbin), so that you can braid a necklace length as well as the bracelet length that the thicker yarn on the white bobbins will do. The bobbins themselves don't make any difference, and I'd argue it's a lot easier to see what I'm doing with the white ones. The "2 in 1" also includes 2 of the plastic clasps in a rose gold color in addition to the silver color ones that come with the basic machine. The clasps don't appeal to me, and neither does the yarn, so I'm reloading bobbins with my own yarns to try. That means that in effect I paid $5 extra for purple.

I found the machine to work surprisingly well. I had expected the usual plastic mechanical kid's toy build quality, which was always a recipe for disappointment when I was a kid. Instead, it works very well, although it takes patience and a careful reading of the little manual before starting. I've had no jams so far, and no other problems. It's noisy, and ergonomically challenging to use. A clamp to hold it down may help with the latter, while exacerbating the former.

I've occasionally run into a problem with the carriers running into the working threads, which Cool Maker's site describes as a thread jam, and each time it was because I had forgotten to follow the directions to get the arm to start lifting up the braid end once the machine was loaded, or had forgotten to reset the arm once it had reached the end of its travel.

The yarn isn't bad, it's some sort of stiff synthetic that seems ideal for bracelets that will get a lot of abrasion during wear, but I'm more interested in trying out my weaving yarns. 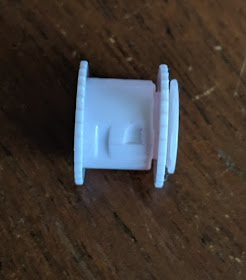 The bobbins are tiny, they're hard to hang onto while winding and they don't hold much yarn, so these channels are extremely helpful.

The bobbins snap into carriers, which can be removed from the machine in case of a jam. There are little keepers in the floor of the center of the machine that keep them from coming out accidentally: 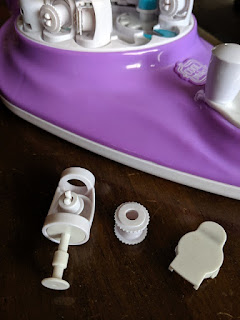 I couldn't figure out how the patterns work at first, so I did a bunch of testing. It turns out it braids a standard 12 strand Kongoh-gumi, but with an S spiral instead of a Z spiral: 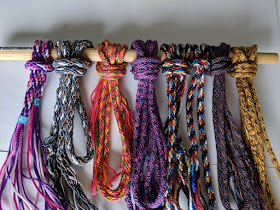 Start by changing the number of threads from 16 to 12. Your braid will be a mirror image of the one you design there.
But you need to know how to translate their pattern into what the machine expects. This took some work to figure out.

Here is the 12-color braid in the Kumihimo Designer: 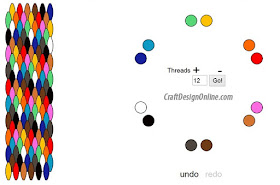 I think of this as if it were a clock. Yellow is at 1:00, orange at 2:00, and so on all the way around the circle to green at 12:00.
You would think you should load it in the machine with yellow to the right of the arm, and green to the left at the top, away from the crank handle. But that results in  an error where one row of the pattern is shifted. 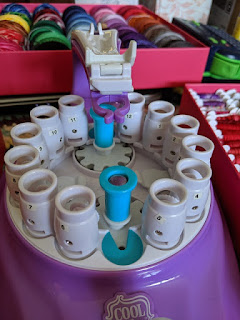 I'm calling this Position A. You can see I've labeled each carrier so I could track where each thread goes. I don't think that's necessary, that was just for figuring out what exactly is happening so I could get the braid I was expecting. Now that that's figured out, as long as you get the machine into the starting position described in the manual (blue spools lined up with empty blue slots), you can start with 12:00 to the right of the arm, followed by 1:00, 2:00, and so on all the way around, ending with 11:00 at the left of the arm.

I would love it if Cool Maker were to produce a 16 strand Kongoh-gumi machine, with larger spools. That would be amazing! As for this machine, it's fun. I will test out some more braids. I may use it to make some bracelets or necklaces. But unfortunately I don't think it can do the things weavers really use kumihimo for, like purse straps, edging for garments, shoe laces, etc. Unless you go with really fine yarn, which would make really skinny braids. Those would look better in the 16 strand patterns, though, because at that fine scale you need something really graphical for the pattern to show up at all.

I haven't tried adding beads, and I expect that to be troublesome at best, since they'll drag the working threads down into the paths of the carriers. But it would be a worthwhile experiment sometime.